Blog/News
You are here: Home / Blog/News / HAPPENINGS / Science Is Fun!… 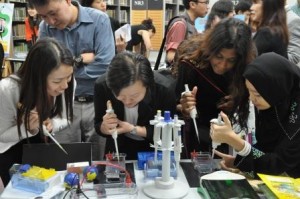 The X-periment! weekend carnival held at the Central Atrium in Marina Square from 19th July to 21st July is part of the festivities organized for Singapore Science Festival 2013. Those who were fortunate enough to visit the Science Centre during the weekend would have the opportunity to witness some very interesting experiments performed by internationally renowned science entertainer, Dr Ken Farquhar. Dr Farquhar performed his ‘Entertaining Science Circus Show’ that demonstrated the science behind some of the common circus feats performed by acrobats across the world. 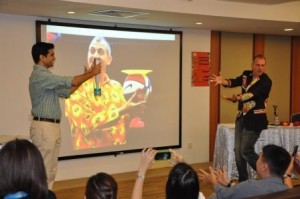 Visitors at X-periment! also had the opportunity to participate in hands-on activities, meet local scientists, and witness up close the innovations created by A*STAR’s research institutes, local universities, and polytechnics. Some of these include printable solar cell batteries from the Institute of Materials Research and Engineering (IMRE) and a giant robotic snake that can mimic real snakes in its movement from Nanyang Polytechnic.

Want to join the discussion?
Feel free to contribute!

What are the benefits of reading The Young Scientists magazine? 20th July’13
Scroll to top